Oil Palm (Elaeis guineensis) popularly known as African Oil Palm or Red Oil Palm, found originally in wild form in the forests of West Africa, was used by natives all over Africa as vegetable oil. When the Europeans reached Africa to explore the continent, around the 15th Century, they discovered the palm tree and that was the time the rest of the world got introduced to it. Four Oil Palm seedlings that entered Asia as ornamental plants, and were planted in Bogor Botanic Garden of Indonesia in 1846, became the potential mother palm source for the whole of Asia’s Oil Palm.

The Government of India started three Oil Palm demonstrations of 1000 hectares, each in Andhra Pradesh, Karnataka and Maharashtra, jointly by the Department of Biotechnology and the Agriculture/Horticulture Departments of the states.

Later, the Oil Palm Development Programme under Technology Mission on Oil Seeds and Pulses was formulated and implemented since the 9th five year plan (1991-92). Subsequently, the Oil Palm Development Project was merged with the Integrated Scheme for Oil Seeds, Pulses, Oil Palm and Maize (ISOPOM) with effect from financial year 2004-2005. A special initiative has been undertaken under RKVY Scheme of Department of Agriculture and Co-operation, Ministry of Agriculture, Government of India, since 2011-2012 for implementation of a special programme on Oil Palm Area Expansion (OPAE) in order to augment the production of Palm Oil by 2.5 to 3.0 lakh tonnes in the next five years.

COMPETITION WITH OTHER OIL SEEDS

Global vegetable oil production over a period of time from 1960 to 2016 showed that soya bean oil was occupying the first place right from 1960 to 2004. Palm Oil made a tremendous progress during that period. It was just 1.264 million MT in 1960 and that reached 61.720 million MT during 2016. Such a fast progress has not occurred in any of the oil seed crops.

Vegetable oil production over the last one decade had made tremendous improvement and the soya bean oil, which was always in the first place in terms of production, has come to second position, since Palm Oil production exceeded soya and occupied the first position. As of 2016, Palm Oil production was 61.720 million MT and that of soya bean oil was 52.010 million MT. Similarly, Palm Kernel Oil also increased to 7.820 million MT for the same period. It was higher than coconut oil which has the highest content of lauric oil. The higher productivity of Palm Oil and Palm Kernel Oil, coupled with area expansion, had contributed to the success of Oil Palm. The world production of 17 oils and fats up to 2016 showed that the production during 2016 had increased to 178.690 million MT.

Vegetable oil demand per USD of the world’s income has grown faster than meal consumption, thanks to the emergence of bio-fuels. Consequently, the world needs a steadily rising share of oil crops with high oil/low meal content. Oil Palm is therefore the ideal crop to supply the lion’s share of the world’s extra oil demand, as could be observed from the following table.

RBD Palm Olein is the liquid fraction obtained by the fractionation of Palm Oil after crystallisation at controlled temperatures. It is used in many countries as edible cooking oil. It is also used as an important raw material in the manufacture of soaps, washing powder and other hygiene and personal care products, margarine, shortening and oleo chemical industries.

India is one of the largest vegetable oil importers in the Asian continent, followed by China. Crude Palm Oil is the single largest commodity of India’s edible oil import basket. India is basically a net importer of Palm Oil. The country imported 9.425 million tonnes of Palm Oil in 2015- 16 according to the estimate of USDA. 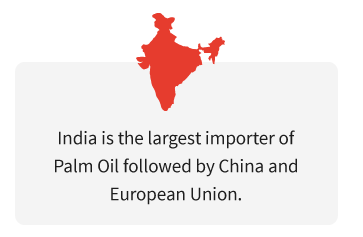 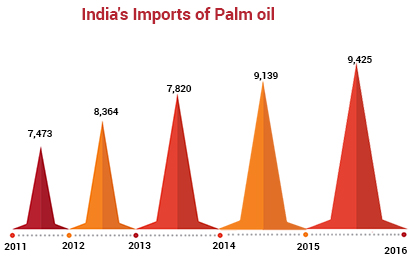 India imports Crude Palm Oil mainly from Indonesia, while from Malaysia it imports mostly RBD Palmolein. Palm Oil imported into India is used in various forms- consumed directly as ‘Palm Oil’ after refining, used in the manufacture of Vanaspati, for blending with other vegetable oils, crude oil and kernel oil for industrial purposes, etc. The Indian Palm Oil market is largely organised and is in the hands of large refining companies. 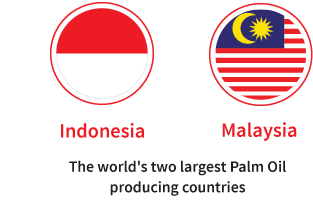 The world’s two largest Palm Oil producing countries are Indonesia and Malaysia, which together account for nearly 86% of the world’s production. Other major producers include Columbia, Thailand and Nigeria. Indonesia has nearly expanded its output in the past decade, making it the largest producer of Palm Oil in the world, accounting for 52% of total world output.
As per United States Department of Agriculture (USDA), Indonesia and Malaysia are the largest exporter of Palm Oil and its by-products, accounting for the entire global trade in Palm Oil.
The exports figures for the last three years were as follows: 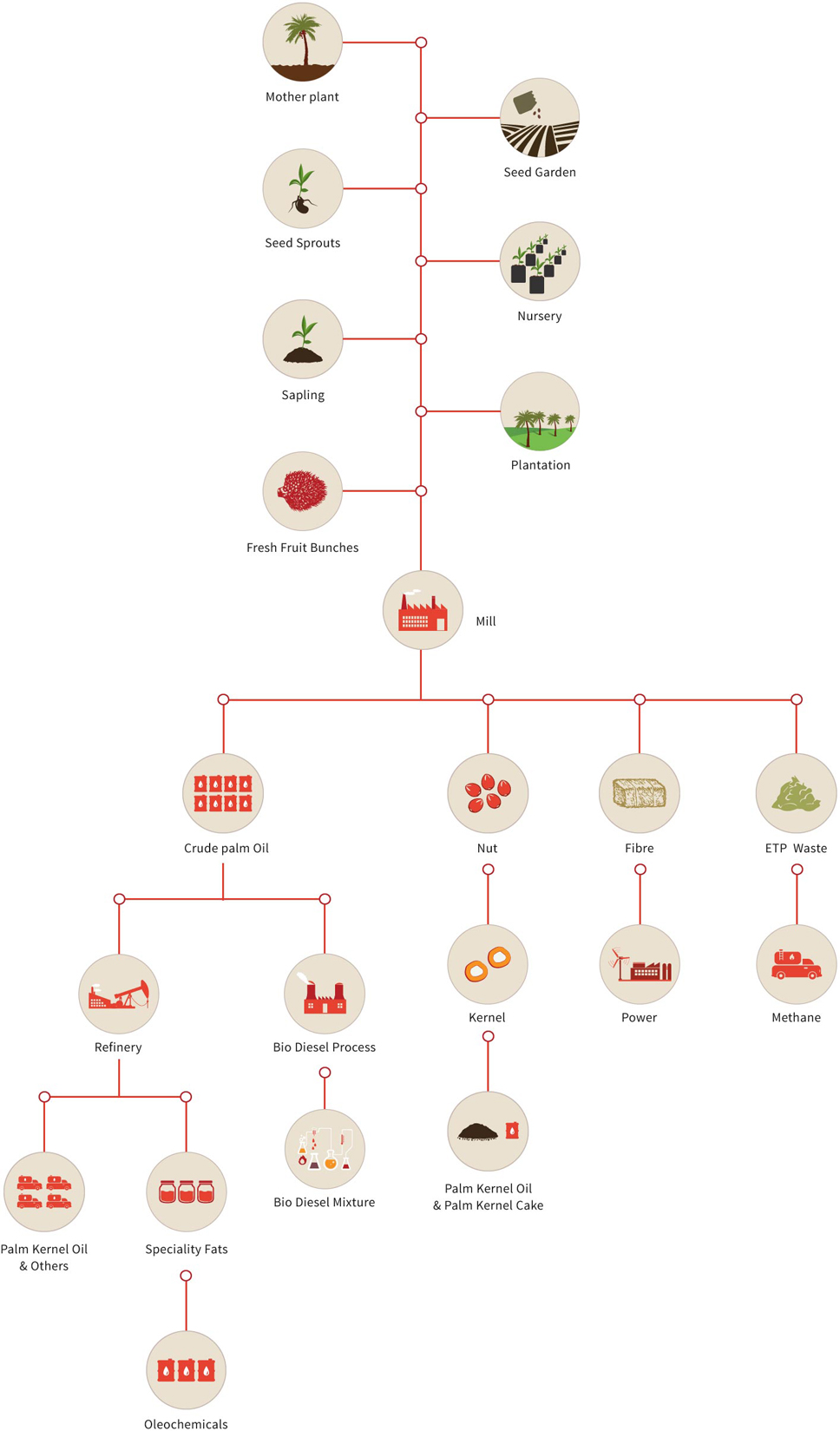 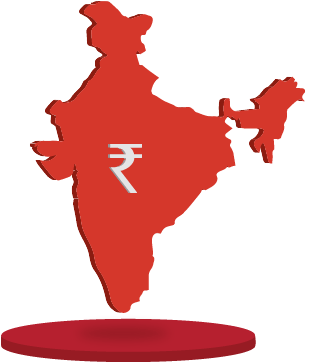 India is the fourth largest edible oil economy in the world and more than half of the nation’s total edible oil requirements are met through imports. Palm oil comprises almost 80% of these imports.  The current domestic production of palm oil can meet just one percent of the nation’s requirement.
The current world average per capita consumption of palm oil is 26 kg per annum while India is at 13-15 kg per annum. Even at these The curry nation’s growing demand for edible oils low per capita levels, India’s requirement is close to 20 Mn tons per annum. Against this, India produces only about 8 Mn tons of various indigenous edible oils with the rest being imported. Any increase in these per capita levels change the entire dynamics and further burden India’s import bill. The palm oil project offers the perfect solution to this due to its increased productivity of 5 tons of oil per hectare planted, as compared to a maximum yield of 1 ton of oil per hectare in the case of other edible oil seeds.

The need for sustainable palm oil was strongly felt by many stake holders during the late 90’s due to the increased concerns towards the cost of long term supply of quality palm oil, environmental awareness and commitments on corporate social responsibility. The triple P approach to palm oil production has created a virtuous cycle of inclusion, profitability and environment conservation.

How does this benefit the economy? If the area under palm oil cultivation is scaled up to 1 Mn hectares, it could result in savings of imports to the tune of INR 280.8 Bn (~USD 4.2 Bn) at current prices. Since the fruit bearing life of Oil Palm is roughly 27 years, cumulated over this period, the foreign exchange savings at current prices will be worth about INR 7580 Bn (~ USD 112.5 Bn), even at India’s low per capita consumption. Given this potential saving in foreign exchange, the country needs to invest to reap this potential benefit through customized public-private investment strategy

According to United Nations Population Division (UNPD), the world’s population in 2050 will be approximately 9.2 billion. To estimate the trend in requirements between now and 2050, one needs estimates of population and per capita consumption. For consumption, there are two opposing trends; first as living standards rise in the developing world, per capita consumption is increasing. Where consumption is currently less than 25/ head/ annum, it will have increased to 25 kg/ head. Where consumption already exceeds 25 kg/ head it would continue at the present rate. In western countries, the level of consumption is 37 kg/ head which are unhealthily high when compared to the desired dietary intake of 20 kg/head.

The above table shows that the medium estimate of edible oil requirements in 2050 is 240 million MT, roughly twice the current production. Low, medium and high consumption estimates described in the table, the text ‘soya increasing’ assumes that soya continues to make up 30% of total production. ‘Soya Constant’ assumes that soya remains constant at the current production level of 36 million tonnes. In each case, Palm Oil increases to meet the remaining demand. 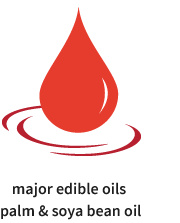 The two major edible oils are Palm Oil and soya bean oil; demand for the latter is driven primarily by demand for oil meal, rather than for vegetable oil. In the past, the rate of growth in demand for soya bean meal has been approximately the same as the rate of growth in demand for vegetable oil, so that soya bean oil has retained a more or less constant share of the vegetable oil market. Thus, base assumption is that soya bean oil will continue to make up 30% of total production. Other oils remain constant at today’s production levels, with Palm Oil making up the difference. Palm Oil is the oil with the lowest production cost. The move away from trans–fatty acids also favours Palm Oil, as it can be used without hydrogenation as the solid component in many formulations. An alternate scenario therefore has Palm Oil meeting the entire additional requirement, with the other oils all remaining constant at today’s levels, including soya. The above table shows future vegetable oil requirements, based on at least 93 million MT and more likely between 120 and 156 million MT (medium estimate).

Among the oil crops, Oil Palm is the ‘land sparing’ option because it gives much higher yields than other crops. The additional oil must come from somewhere; if that requirement, under the medium consumption estimate were all to come from soya bean, a total area of that crop of about 189 million ha. would be needed in 2050 (assuming that yields continue to rise by about 1.5% per year). This is roughly double the current area under soya beans. Much of the current expansion of soya beans is in the Brazilian Amazon region, so environmental damage is probably comparable to that from recent Oil Palm expansion at the expense of forests in Indonesia. Thus it would be preferable to meet the increasing demand for edible oil with additional 19 million hectares of Oil Palm (medium estimate, soya constant and improved yields) rather than an additional 95 million hectares of soya beans. Assuming that Palm Oil yields continue to improve, and that soya been production also increases, then additional 12 million hectares of oil palm will be required. The major countries where the expansion can take place are Indonesia, Brazil and Columbia.

Besides producing oils and fats, at present there is a continuous increasing interest concerning Oil Palm renewable energy. One of the major attentions is bio-diesel from Palm Oil. Palm Oil bio-diesel is bio-degradable, non-toxic and has significantly lower emissions than petroleum-based diesel when burned. In addition to this, Oil Palm is also well-known plant for its other sources of renewable energy, for example, huge quantities of bio-mass by-products are developed to produce value added products such as organic acids, bio-compost, plywood, activated carbon, and animal feedstock. Even Oil Palm Mill Effluent (POME) has been converted to produce energy.

India’s per capita consumption of edible oil (14kg/ person) is far below global standards (26kg/ person) and is growing year on year.

Palm Oil generates 5 times the yield per unit of land compared to other sources of oil seeds.

India currently has 2.70 crores hectares under oil seeds of which a meagre 3.60 lakh hectares is used for Oil Palm.